FRANKLIN, Tenn. (WTVF) — Child exploitation cases are increasing across the country, and detectives are working hard to lock up offenders.

“People are sharing it over the internet at rates, you know, 10 or 15 years ago wasn’t possible,” Williamson County Sheriff’s Office Digital Forensic Examiner Paul Lusk explained.

“We handle digital forensics for all the cases in our county as well as assisting other counties around us,” Lusk said.

So far this year, the Williamson County Sheriff’s Office Internet Crimes Against Children Task Force has made 19 arrests, which resulted in 115 felony charges against people harming children.

“All the new devices that come out or with every new phone that comes out, we have to learn and adapt to be able to forensically search those or find evidence in them to be able to prosecute these crimes,” Lusk said.

Lusk said finding the evidence to prosecute these predators, like a hard drive, can be difficult to find with the human eye.

Since criminals are hiding these small items, this is where Remi comes in: Tennessee’s first Electronic Detection K9.

Remi’s handler and Detective Lee Eaves trained for 16 weeks back in 2017, before she was ready to go to work.

Remi locates the electronics that bad guys don’t want officers to find, and she’s also a support animal to the detectives, victims, and witnesses. 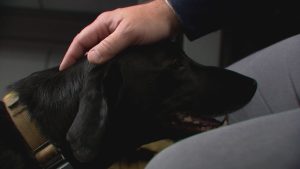 “She’s going to go look for that electronic device or a piece of media — whether it be thumb drive, hard drive, an actual computer, cell phone. When she wins that game, she gets her ball,” Eaves explained.

Remi is coming up on 7 years old, so she still has several years to help victims get justice.

Remi is one of 70 electronic detection K9s in the world. She’s the state’s first Electronic Detection K9.

The sheriff’s office says social media is where a lot of these crimes take place, and it asks parents to pay attention to what their children do online and whom they talk to.