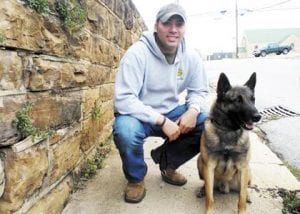 Det. Craig Capps proudly shows off his new K-9 partner Taro, who he purchased through his own fundraising efforts. Taro will be on patrol beginning March 4.

Detective Craig Capps of the White County Sheriff Department has been hitting the pavement hard lately, and it’s not just to lock up those who break the law.

When his beloved K-9 partner Duco, who helped him not only make numerous drug arrests, but also save lives, passed away recently, Det. Capps knew he would have to find a new K-9 partner, and raise the money himself to pay for the dog.

Det. Capps found his new partner, Taro, at Nashville Canine. Taro had been imported from the Netherlands and carried a hefty price tag: $4,000. Det. Capps knew he would be responsible for raising this money, and immediately began soliciting donations.

Over the past month, Det. Capps has been fundraising with the help of local businesses and citizens. He has sold baseball caps, stuffed German Shepherd toys, and even held a drawing to win a rocking chair donated by Shaffield’s Furniture.

Because of his effort, he has gotten very close to reaching his $4,000 goal. He is continuing to sell the stuffed German Shepherds through the Sheriff Department or Dog and Company until they are sold out.

Det. Capps will be donating Taro to the Sheriff Department for service. He expects Taro to be ready for duty on March 4, though he has already been undergoing drug detection training for several weeks now.

To purchase one of the stuffed German Shepherds, call Darlene Young at the Sheriff Department at 836-2700.
Read More