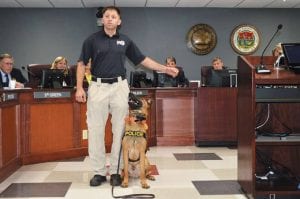 As the 2013-14 fiscal year comes to a close, the Williamson County Commission approved resolutions that will complete the books for this year as well as solidify the county budget for the 2014-15 fiscal year.

Resolutions in education came to the forefront of the county commission meeting this week.

A monumental resolution, securing the first round of funding for the new schools in Nolensville, was unanimously approved.

Additionally, the commission awarded a “Proclamation of Achievement” to the Williamson County Schools district and approved payment to teachers for their extra work due to the late submission of TCAP scores by the state. Even a new district slogan was introduced promoting positive actions across the district.

A new K-9, Ammo, was also introduced to county commissioners and an agreement to provide extra law enforcement for the town of Thompson’s Station was approved.

After much planning and deliberation over the past few months, the county commission unanimously passed a $40 million resolution to begin the construction of the three new schools in Nolensville to be completed by 2016.

With no discussion, the commission approved the amount unanimously at the body’s regular meeting this week. The county budget and education committees first approved the capital expenditure earlier in May and June, which prompted discussions during committee meetings. County officials will issue bonds in the fall.

The amount represents half of the funds required to complete the schools – Mill Creek Elementary, Mill Creek Middle School and Nolensville High School to be constructed on the same campus.

Superintendent Dr. Mike Looney said that he plans to ask the commission for the remaining funds at a later date.

The body also passed a resolution to pay teachers $113,617 for an unscheduled day of work to tally student grades, following the Tennessee Department of Education’s delay in issuing TCAP scores. TCAP scores are factored into the student’s final grade, which count 15 percent.

Looney said he plans to request a reimbursement from the state.

The resolution passed 20-1 with Commissioner Dwight Jones, District 1, voting against. Jones said after the meeting that, although he supports teachers, he believes that the cost should be absorbed by the state.

“Thank you, Dr. Looney, for sending out report cards sooner than expected,” Commissioner Kathy Danner, District 4, said. Although teachers had until this Friday to complete the task, some reports have already been mailed.

The Williamson County Sheriff’s Office welcomed a new multi-lingual four-legged furry member to the force this week, ready to participate in searches and apprehend as needed.

Ammo, a 21-month old Belgian Shepherd worth $15,000, was donated to the sheriff’s office by Nashville K-9, a law enforcement dog training organization.

When Hemyari heard about WCSO’s need for another trained K-9 dog, he felt that Ammo fit the profile as the ideal candidate. Ammo’s new handler from the sheriff’s office will be Deputy Keith Bennett.

Ammo will replace his predecessor, Cash, who is retiring from the K-9 unit.

Officials from the Town of Thompson’s Station approached the sheriff’s office about gaining an extra officer for patrol.

A $54,000 donation and a Chevrolet Impala was presented as compensation for the department’s added cost.

Sheriff Jeff Long presented the request to county commissioners, who approved the measure.