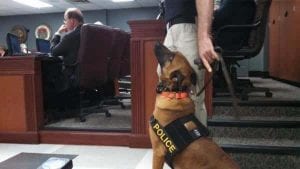 A total of $113,617 from the undesignated fund balance also passed the commission to compensate teachers.

Report cards for district students were mailed last week. The reports were delayed after the state Department of Education failed to return TCAP quick scores on time.

TCAP scores account for 15 percent of students’ final grades, so local teachers were compensated to delay their vacations to enter the scores into the grading system. They were given until June 13, but apparently finished the job early.

“Thank you for getting report cards out sooner than you said. I was pleasantly surprised to get it last week,” Commissioner Kathy Danner told Superintendent Mike Looney.

The commission approved the sheriff’s department to accept a K-9 donation, Ammo, from Nashville K-9.

A two-year-old Belgian Shepard, Ammo is an apprehension, tracking and narcotics dog worth $15,000. He understands commands in a combination of French, German and Czech.

The dog will join the sheriff’s department under Deputy Keith Bennett.

Commissioner Brian Beathard presented a Proclamation of Achievement honoring Williamson County Schools for being the number one school district serving 20,000 students or more in the nation based on data pulled from SchoolDigger.com.

“This board has long believed this district was destined for greatness,” school board Chair Anderson said. “In January 2011, we adopted the Williamson County Strategic Plan, and that has served as this district’s guide. We have made remarkable progress toward this. It clearly demonstrates this community’s commitment to public education.”

Anderson continued, “All the puzzle pieces were brought together under [Superintendent Mike] Looney, the board, administration and staff. We have the best teachers in the country and a county commission that supports our work. That makes all of this the most awesome team we could hope to have.”

Looney also hinted that, after seeing this year’s TCAP scores, the school district will maintain its number one status.

The town of Thompson’s Station requested extra law enforcement protection from the county sheriff’s department. Commissioners approved the agreement, which provides that the town will donate $50,000 and a Chevrolet Impala for the deputy’s compensation and use.

The contracted deputy would be on duty within the town limits, but would be on call in other parts of the county as needed.

An agreement between Williamson County and the City of Franklin was approved, which will allow the county to have a say in selecting an auditing firm for the Cool Springs Conference Center.

Through the commission’s approval, $1,105,200 in state funds will go toward local health services.

An establishment and assessment of fees collected by Williamson Animal Control was approved by commissioners, which are collected for not only dogs and cats but also ferrets, guinea pigs, birds and rabbits taken in by the shelter.

The commission also voted for lease renewals with the J.L. Clay Center and senior citizen centers in College Grove, Bethesda and Hillsboro.

Jessica Pace covers Williamson County, Williamson County Schools and the Town of Nolensville for BrentWord Communications. Contact her at jess@brentwoodhomepage.com or follow her on Twitter @Jess_Marie_Pace.