Franklin officer Finn returns home after fight for his life 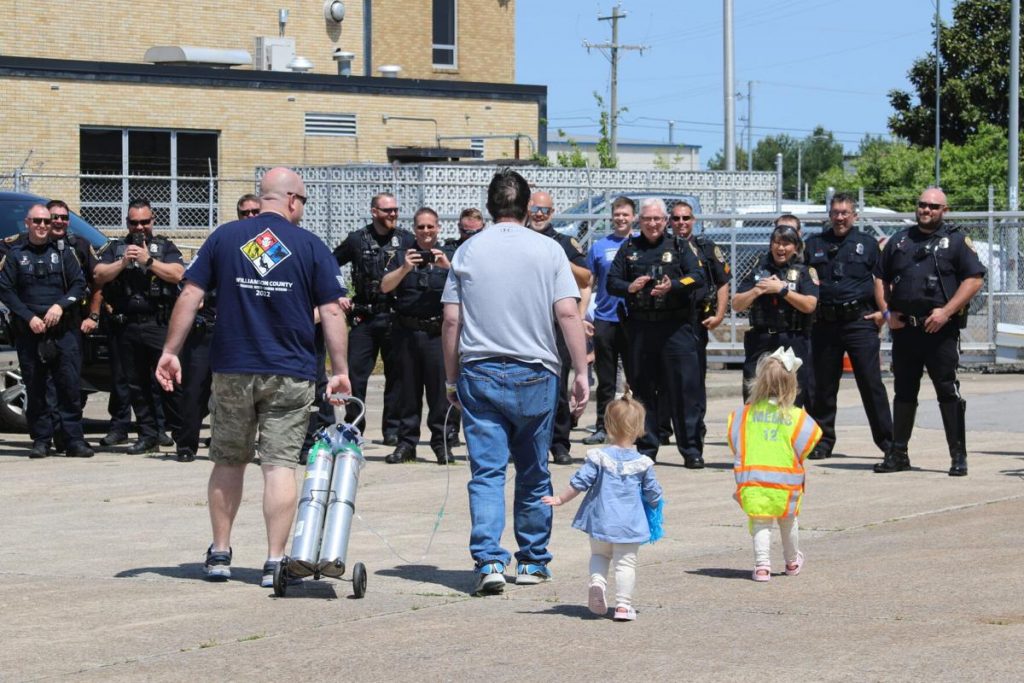 Franklin police officer Sean Finn was treated to an emotional homecoming on Wednesday.

He returned to Nashville after battling COVID-19 in a South Florida hospital for 100 days. Family, friends and his Franklin Police Department family were all gathered together as a private jet flying him home finally landed.

Finn, 32, caught COVID-19 during the holidays and went to the ER on New Year’s Day. After being admitted, his condition worsened, and he was placed on a ventilator.

Physicians told Finn’s wife, Lauren, that he needed and ECMO machine to survive. An ECMO is an artificial lung that breaths for the patient so a lung can heal.

Due to the surge in COVID-19 cases in Middle Tennessee at that time because of the omicron variant, there were no ECMO machines availabile nearby. One was found in a Florida hospital, and Finn was transported on a medical flight while sedated and on a ventilator.

Finn spent 81 days on the ECMO machine. He miraculously survived, with Lauren fighting for her husband’s life alongside the medical staff.

The next hurdle was figuring out how to bring Finn home. Insurance wouldn’t pay for another medical transport, and driving him home wasn’t an option; the couple was left wondering how to maneuver.

Good Samaritan Gabrielle Hanson, a Franklin alderman, had been following Finn’s story. She jumped into action, making calls to Ali Hemyari, owner of Nashville K-9, to see if he would lend his jet to bring Finn and his wife home.

The cost of a flight usually ranges from $18,000-20,000, due to fuel cost. Hemyari collaborated with John Sanzo, owner of Secure Air Charter, to leverage one of Nashville K-9’s planes, and Hemyari and Sanzo covered the fuel cost, a pilot and staff.

Hanson then called Bobby Joslin, owner of Joslin Sign Company and a board member at Nashville International Airport, to help raise funds towards some of the cost of the flight. Hanson donated $6,700 of her own money.

“I do not know [the Finns], but this was something we had to do,” Hanson said. “After all he has done for the community, I had to step up and help them.”

Hemyari is also a sergeant with the Nolensville Police Department. He said the mission was simple.

“We knew we had to get our fellow officer back,” he said. “Police departments are all the same — we secure the public, but we serve fellow police officers in need.

“[Williamson County] is special; everybody bands together to help. We have the resources and collaboration to make it happen.”

After Finn stepped off the plane, his oldest daughter threw herself into her dad’s arms as emotions ran high. Finn’s parents and his wife’s family were all waiting to give hugs and welcome him home.

He walked with his daughters by his side to greet his FPD family. He is also a security guard for Williamson Medical Center, and the WMC paramedics who transported him home were thrilled to see their friend.

Finn told his story about going to the ER on New Year’s Day thinking he would just get some fluids and oxygen and go home. He didn’t wake up until Feb. 3.

“Live every day to the fullest. You never know if it’s going to be your last,” he said.

Finn gives full credit to the hospital staff that saved his life.

His next step will be rehabilitation at home. But not before he gets some much-needed dad time.

“I am looking forward to being with my wife and my girls,” he said.